It is encouraging that so many members of the public care about the welfare of cats, and try to help when they see a cat in trouble. Even though people want to help, they are not always sure where to go so they often turn to Facebook and ask for help there. That is exactly why at Felines 1st, we try to look out for these kinds of posts on Facebook. Sadly there are usually more cats that need our help than even the most observant residents are aware of. 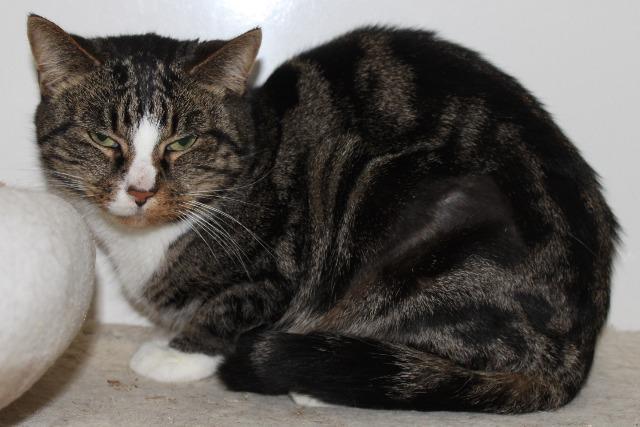 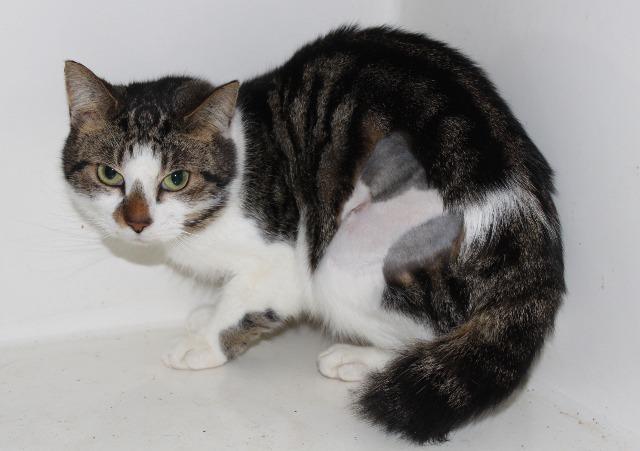 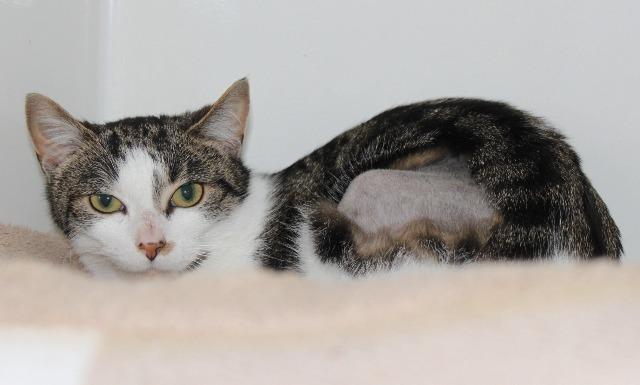 One such story that highlights these issues started with a post on Facebook, which referred to a cat lying near traffic lights opposite the Cineworld cinema in Crawley. We asked one of our experienced volunteers to go out and investigate. When she got there she found that the cat had been hit by a car and had sadly not survived. We scanned her for a microchip but there was none, and  no-one had reported a cat of her description missing in the area.

It did not end there however…

A couple of days later a local resident saw another tabby and white kitten raiding the bins nearby in Town Mead Road and managed to catch it and took the scared stray to Vets 4 Pets. During a health check, the vet established that the kitten was around six months old, and had clearly been surviving on scraps of food from the bins, as eggshells were found in the litter tray the next morning.  Once it was clear that the kitten was otherwise healthy, it was placed into foster care with Felines 1st.

This was only the beginning of a much bigger rescue…

After being informed of the location of where the kitten was found, Felines 1st went to investigate to find out if there were any more kittens from the same litter that were in a similar situation. Rescues take lots of time and usually several sessions lasting 5 or 6 hours each. Time is spent observing and assessing the situation, as well as coaxing the cat with titbits and encouraging them into traps. Cats are clever and wily creatures, and those that have been living on the streets are especially so. That is why it takes incredibly dedicated volunteers to do this work. During one of these sessions, our volunteer noticed another kitten hiding under a parked car, so set a trap to catch that one, but ended up catching two! She also asked the local residents to keep their eyes open as she thought it likely that there would be other in the area. After 5 days of watching, she spotted yet another kitten, and a couple of days later, another was caught! A black cat was also spotted hanging around Sainsbury’s and so a trap was set there; however, instead of trapping the black cat, an entire tabby male was trapped, possibly the father of some of the kittens caught.  Eventually after 10 days a total of five kittens (all female and all wild and unhandled) and one unneutered male cat were caught. All of these have been taken to the vet for health checks and are now in the care of Felines 1st.

Why is this rescue so important?

There are several reasons: Even though these are young clever kittens, they are living off a poor diet of scraps from bins in the middle of a town, and always at risk of being killed by a car. From a welfare point of view, this is not a desirable lifestyle for any animal.

Secondly, it is important to socialise kittens at a young age, as if this stage is missed, it is a lot harder to integrate them into a human household – but not impossible. If they are young it is still possible to win their trust. Already one of the kittens first rescued is starting to trust the fosterer and will take food from their hands. All of the kittens are already starting to warm to human interaction. Felines 1st will assess each cat’s needs and if they prefer a outdoor home this will be found for them.

Thirdly, if these five female kittens did survive, they would be mature within six months and capable of having multiple litters, each of which would be reproductive in the future. Even one unwanted kitten can lead to hundreds of unwanted kittens in just a few years. Finding enough caring human homes is already difficult, so at the very least these cats and kittens need to be neutered to avoid exacerbating the problem of abandoned and unwanted cats.

Not quite the end…

There still might be other kittens out there and we have not yet managed to trap the black cat seen at Sainsburys. Our dedicated volunteer is continuing to spend her evenings in the area, intent on catching him and bringing him out of the cold. We will continue to keep you updated on her progress.

The cats and kittens that feature in this story are abandoned and unwanted. Without our help, they face uncertain and unhappy futures. Felines 1st is entirely dependent on funds raised through fund raising events, and from donations of goodwill. If this story or any of the other work that we do moves or inspires you, please do consider donating to this cause by visiting our Fundraising page or contacting supporters@felines1st.org Felines 1st is a registered charity run entirely by volunteers. Aside from minimal admin costs, all funds we raise go directly to helping cats. Alternatively you may want to offer your time by being a volunteer. Any help and support you can give is greatly needed, and greatly appreciated.

One thought on “The tale of five kittens”